According to Robert Agnew’ s General Strain Theory, strain is based on three different factors:

Compared to Merton’s explanations of anomie theory, the General Strain Theory provides a broader view of the causes of stress.

According to Agnew there are three main reasons for deviance-producing strain:

According to Agnew “strain” can occur in all strata of the population and is not a class-specific phenomenon. He tries to explain how “strain” leads to criminal acts. He assumes that stress leads to negative emotional states such as anger (violent behaviour) or depression (the use of drugs), which are conducive to different delinquent behaviour without adequate coping skills.

Agnew sees the reasons why some react to the psychological stress with norm-compliant and others with criminal behaviour in the lack of coping skills (e.g. intelligence, creativity, problem-solving skills, etc.). In addition, negative factors such as a criminal environment or criminal character traits have a negative influence on dealing with stress. 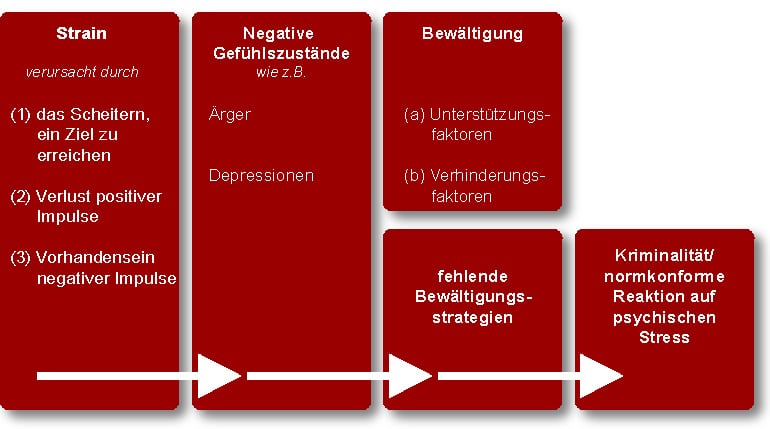 Agnew’s criminal policy demands can be regarded as manifold, as his theory also has several different causal factors:

First of all, it can be assumed that General Strain Theory, as a theory related to Merton’s considerations of good social policy with the possibility of achieving his individual (e.g. material) goals, is also related to good social policy. Social inequality in society leads to higher pressure on disadvantaged members and thus to an increase in the likelihood of becoming criminals.

Secondly, due to a certain approximation to the control and attachment theories, Agnew’s criminal policy implications must also be taken into account: The loss of positive stimuli and the experience of negative stimuli are mostly changes within the individual social environment or can at least be reinforced or prevented by it.

Finally, the coping strategies mentioned in the Strain Theory allow for another form of crime prevention: Since the decisive factors for committing a criminal act are ultimately anger and frustration, it must be the task of (re-)socialization programs to learn alternative ways of thinking and behaving that prevent or at least contain the emergence of such emotions. An example would be the so-called “hot chair” from social therapy, which is intended to train the correct handling of negative emotions.

With the General Strain Theory, Agnew has succeeded in expanding anomie theory, which is limited to lower class crime, and in combining it with other theoretical concepts such as social control, social disorganisation and emotions. The almost multifactorial nature of the theory, however, leads to the unavoidable question of what is ultimately the decision criterion for behaving differently due to adverse circumstances or for remaining compliant despite a whole range of negative factors in one’s individual environment. However, he does not explicitly describe the role they play. In what form do they influence in detail the handling of stress on the part of the individual? In addition, criticism of the anomie, control and theories of social disorganization can also be made analogously in General Strain Theory.