According to German sociologist Henner Hess, the emergence and consolidation of criminal behaviour can be explained by careers. The actor glides processually, pushed through the outside world and situation, but ultimately individually chosen, into a delinquent role.

Hess’ basic assumption regarding crime theories is that deviant behavior cannot be explained by a single hypothesis, but that a kind of filtering process, a career model, is needed to describe the development of delinquent behavior of individuals.

Hess thus considers both the characteristics of the acting person and the characteristics of the situation in which the acting person finds himself. He pays particular attention to the constant changes to which the person and the situation are subject and which always bring with them new possibilities or constraints for (deviant) behaviour. Ultimately, however, it is always the individual decisions of the actors that determine criminal or conformal behaviour at every point in the career. Hess’ career model goes through several phases, which he illustrates using the example of “prostitution” (Hess, 1978): 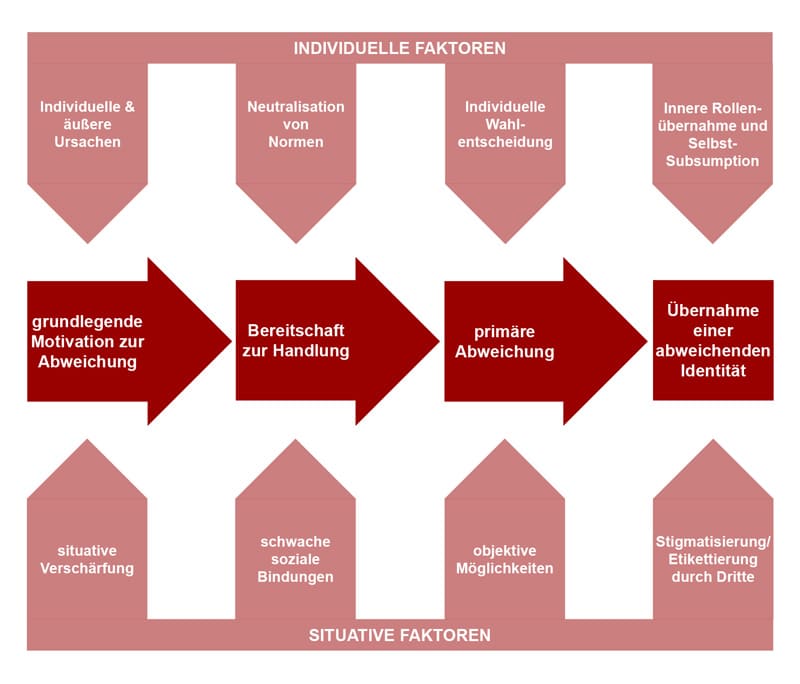 Altogether Hess thus connects etiological theories such as those of Merton, Sutherland, Hirschi and others with the penological approaches of Becker and Lemert, but at the same time emphasizes the continuous, individual possibility of nevertheless being able to decide against the external and situational determinants and factors. Thus also the rational-classical paradigm of criminology has not been forgotten by Hess.

Due to the very comprehensive model, which takes into account all criminological paradigms, the criminal policy implication for Hess is very complex. In addition, it is difficult to determine, since Hess explicitly describes only the micro-perspective part of a general crime theory that he considers necessary. The latter was finally developed by Hess (together with Scheerer) under the name of Social Constructivist Crime Theory (Sozialkonstruktivistische Kriminalitätstheorie), into which Hess’ career model was integrated and from which the corresponding implications for criminal policy can be derived.

The career model of Hess certainly has its strength in the combination of different basic criminological paradigms: etiological theories are associated with parts of the labeling approach, and the individual’s freedom of will is addressed as well as his determination by external factors; while the latter context is reminiscent of David Matza’s postulate of a soft determinism, the attempt to combine etiological and penological theories seems to represent criminological new territory: Hess describes both the causes of criminal acts and the consequences of labeling and stigmatization.

Critically, however, one could claim that Hess’ model is merely a supplement to Lemert’s theory of secondary deviance to explain the primary deviation. The actual statement of the labeling approach that crime is only what people call crime is not really taken into account by Hess. Likewise, there are no social structural factors that could promote or prevent motivation and the willingness to delinquency.

Once again, reference is made to Hess’ and Scheerer’s social constructivist theory of crime, in which all these factors were taken into account.