Edwin Sutherland’s theory of differential association assumes that criminal behavior is learned through contact with individuals who are themselves criminal.

It is therefore also called the “theory of differential contacts”. The term “association”, however, refines this idea by the realization that it is not sufficient to merely contact criminal persons, but that during these contacts the criminal definitions and attitudes must also be successfully conveyed.

In simple terms, one could say that contact with criminals leads to one’s own criminal behaviour by learning the corresponding behaviour in a model manner. This becomes even more likey when there is fewer contact to non-criminals. 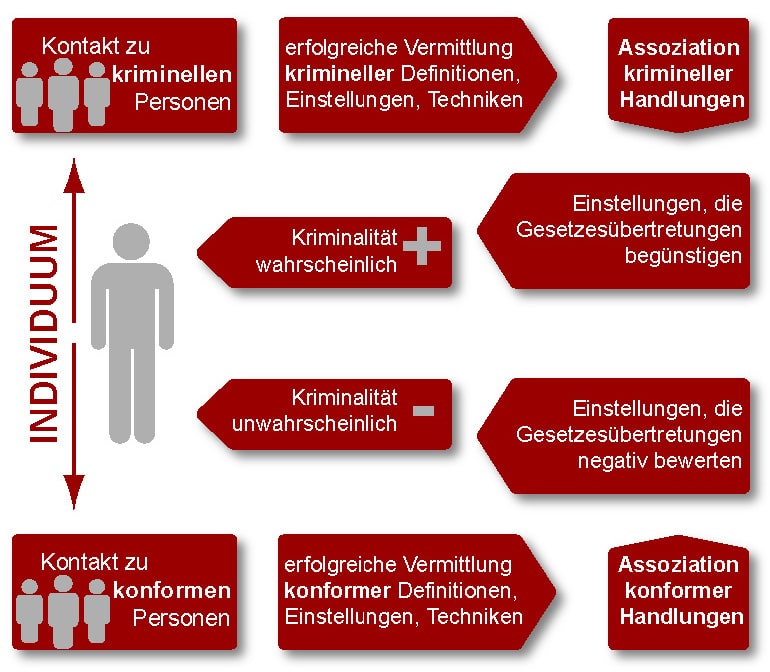 Sutherland’s theory of differential association stands for a rehabilitative ideal. Since criminal attitudes and activities can be learnt, these can be logically deduced and re-learned, or compliant behaviour, attitudes and rationalisation can be achieved in the first place.

In the sense of the ultimately decisive imbalance in theory between associated attitudes that favour violations of the law and attitudes that evaluate violations of the law negatively, it must therefore be the goal of justice and society to surround criminals with non-criminals or to dissolve social spaces in which predominantly people with deviant motives and patterns of action live.

Furthermore, criminal law must build on the ideal of rehabilitating offenders.

In the past, Sutherland was often accused of theoretical gaps in his concept, for which other theories or theoretical extensions were developed.

Thus Sutherland himself drew attention to the different needs and preferences of learning individuals, who significantly contribute to deciding whether deviant actions and attitudes are accepted or not.

Glaser pointed out, however, that it is not the number of people with deviant attitudes that is decisive for learning crime, but rather the degree of identification with one or a few people.

Akers (and also Eysenck) extended Sutherland’s theory to include a detailed analysis of the learning processes taking place (conditioning, social learning/ observing a model, etc.).
Despite this, Sutherland’s crime-related learning theory has to struggle with the accusation of partial tautology, since the existence of delinquency must already exist for it to be passed on at all.

Sutherland’s thesis also assumes a purely behaviorist view: The human being reacts automatically and reflexively to stimuli in the environment. Cognitive or unbiased aspects are not sufficiently considered here, yet Sutherland’s theory can be regarded as a far-reaching anti-biologistic theory. According to Sutherland, the consideration of social processes in the search for the causes of crime has only really taken its course and has certainly long since become predominant in criminological research alongside social-structural aspects. The idea that crime can be learned has turned the previously very perpetrator-oriented perspective into a sociological and socio-psychological one.