Hirschi assumes in his social bonds theory that humans have a natural tendency to delinquency. The interesting question for him is what prevents people from violating norms. According to Hirschi, conformity is generated by social control. Hirschi distinguishes four different forms of social bonds and their influence on social control: attachment, commitment, involvement and belief.

Hirschi’s social bonds theory is based on the basic assumption that humans naturally tend towards delinquency. The interesting question for him is what prevents people from deviating from norms. Hirschi assumes that the stronger the degree of social control and the denser the network of social bonds are, the more likely people are to behave in accordance with standards.

Hirschi explicitly refers his theory (but not only) to adolescent delinquents and thus contradicts the assumption that delinquent adolescents exert a decisive influence on their peers of the same age (see on this: Sutherland’s theory of differential associations).

By “social bonds” Hirschi understands elements of social cohesion (bonds). These include attachment to the family, commitment to socially accepted norms and institutions, involvement in activities and belief that these things are important.

Attachment describes the strength of the bonds and relationships that exist with an individual’s social environment. The relationship with parents is particularly important, but other institutions and actors such as school or friends also play a role. The attachment to the circle of friends can also prevent deviance, but only as long as the circle of friends does not represent deviant norms.

Commitment describes the level of dedication invested in conventional standards and goals. Hirschi assumes that someone who has already invested resources, time and energy in achieving compliant goals has more to lose through deviant behaviour than someone who has invested little devotion in pursuing socially accepted goals. For example, a student who has invested a lot of time to achieve good grades has more to lose through expulsion than a lazy student who has less importance for grades.

By involvement Hirschi means that someone who is intensively involved in conventional activities has less time and opportunity to engage in deviant behavior. Structured, socially accepted activities such as school, work or raising children also strengthen the self-discipline needed to resist the impulses of deviant behaviour.

Hirschi sees belief as the fourth factor in social bonding. This refers to the belief in and validity of the values and norms of the mainstream society. The more these values and norms have been internalized, the more difficult it becomes to violate them. When the meaning of norms is questioned, the intrinsic motivation to obey them also decreases. 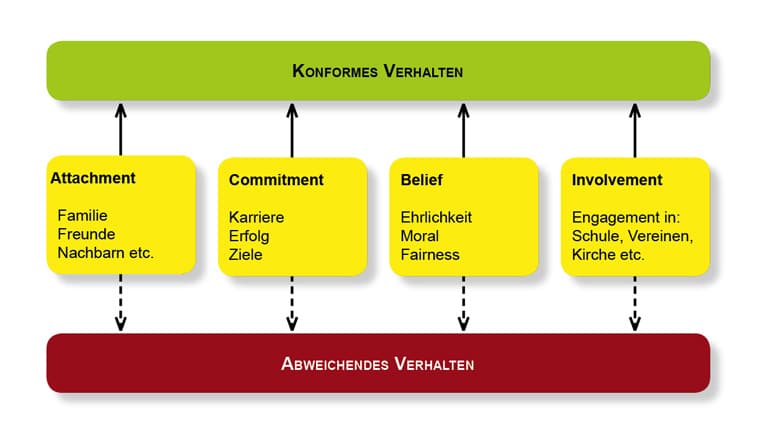 One can criticize Hirschi’s control theory for the fact that the motivation to behave deviantly is simply assumed. Individual reasons for deviant behavior are ignored. Hirschi’s four variables are not easily applicable to all forms of crime. White Collar Crime can be seen as an example. People who commit this form of crime are usually well integrated into society and have strong bonds, at least at the levels of involvement and commitment.

Empirically, the Social Bonds theory has been extensively studied. The results differ for the different variables:

Finally, Hirschi himself strongly criticized his theory and in 1990, together with his colleague Gottfredson, he refined it into the “General Theory of Crime”.